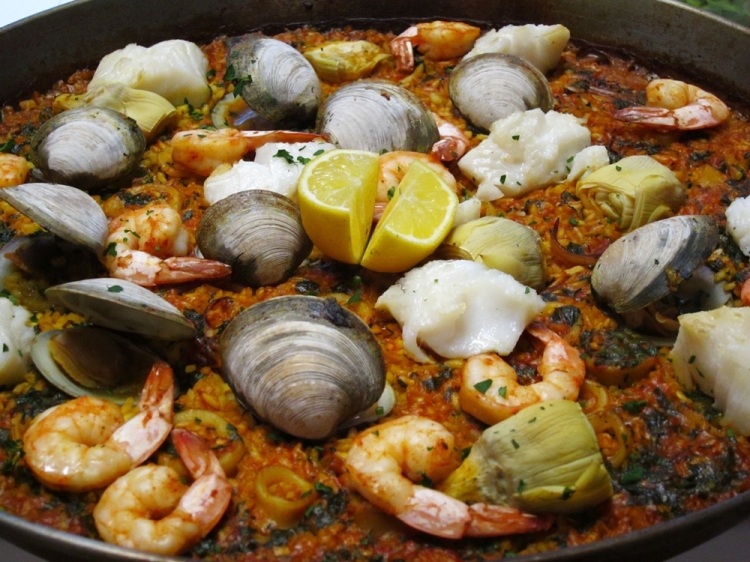 A perfect paella is a wonderful dish. I love the process of cooking it to perfection almost as much as I enjoy eating the result. Like many “traditional” dished tied to locales, it inspires arguments and controversy as to what constitutes the proper “Paella”. Supposedly the original dish was cooked over an open fire by the men, while women attended Sunday service at church. It’s also a dish created by shepherds and farmers with no access to the ocean. So, the true Paella Valenciana included nothing more than what the cooks could hunt, gather and grow. The ingredient list was limited to rice, snails, rabbit and some beans. Unlike most current incarnations, including this one here, the original dish certainly used no saffron. As the popularity of the dish spread, cooks incorporated more and more local ingredients like chicken, chorizo and seafood.

As far as I am concerned a Paella has to be cooked in the pan that gives the dish its name, a Paella. The shallow flat carbon steel pan reacts quickly to heat fluctuation and aids in the quick evaporation of liquid. The pan also helps maximize the surface area that comes in contact with the rice. The contact, while the rice is left unstirred as it cooks, produces another Paella must-have, a crispy tasty crust that sticks to the pan and is known as Socarrat. The layers of rice in a proper Paella has to be thin, ideally no more than an inch thick. One can make a very good rice dish in a regular pot, but that’s more like a pilaf than a Paella. The type of rice to use is a good short grain one like Spanish Bomba or even Italian risotto rice like Violone Nano.

This particular recipe here is adapted from Anya Von Bremzen’s book “The New Spanish Table“. Chiringuitos in the title refers to humble seaside shops that are the Spanish coast’s equivalent to New England’s clam shacks. The dish includes clams, shrimp, squid and red snapper. I also added quartered artichoke hearts to the mix. It is flavored with onions, tomatoes, garlic and saffron. Von Bremzen recommends the cook not to skip the Allioli that is traditionally served with Paella, and I took her advice. Allioli is a type of mayonnaise made with a good bit of raw garlic and olive oil. A spoonful on top of a serving of the rice adds tons of flavor, some kick and a wonderful creamy mouthfeel.