I mentioned before how much Diana loves butternut squash tortelloni with sage. I have to make them as soon as fall comes around and the first winter squashes start showing up, I start making plans to prep a batch and maybe freeze some for later. This time around I wanted to try something different, maybe a bit more refined and elegant. The French Laundry’s agnolotti fit the bill perfectly. The flavor profile of sweet potatoes is a good substitute for the normal butternut squash I use and the sauce is a sage flavored cream sauce.

To make the filling, I roasted the sweet potatoes in individual foil packets with butter. While the potatoes were cooking I finely chopped two slices of bacon and cooked them until crisp. When the potatoes were done I peeled them, pressed them through a ricer and mixed them with spices, the bacon and some butter. The mixture was heated and stirred gently until it was smooth and everything incorporated. I put the filling in a piping bag fitted with a 1/2 inch tip. A canvas piping bag here is essential because the mixture is quiet stiff and on the dry side, so using a cut off Ziploc bag is not going to work and will probably rip.

The French Laundry pasta dough is richer than the one I normally make. It’s made from all-purpose flour, egg yolks and a tiny bit of milk and olive oil. After kneading the dough thoroughly, we end up with a silky smooth and firm dough. I let it rest (up to a couple of days is ok as long as it is tightly wrapped in plastic) before rolling it into sheets that are about 4.5 inches wide. The process of actually filling and shaping the agnolotti is unique, time-consuming and can be very tricky. The book has like a whole page describing how it’s done with the double fold and proper way to seal them, so I’m not going to repeat that here and will let the pictures do the explaining. Until I started filling these little purses and botched the first batch I really did not know what I was doing. Then after the first successful and fully sealed batch, I was good to go and went through the rest of them fairly quickly. I can only imagine how much stressful it is to make these for a full dinner service with various fillings. 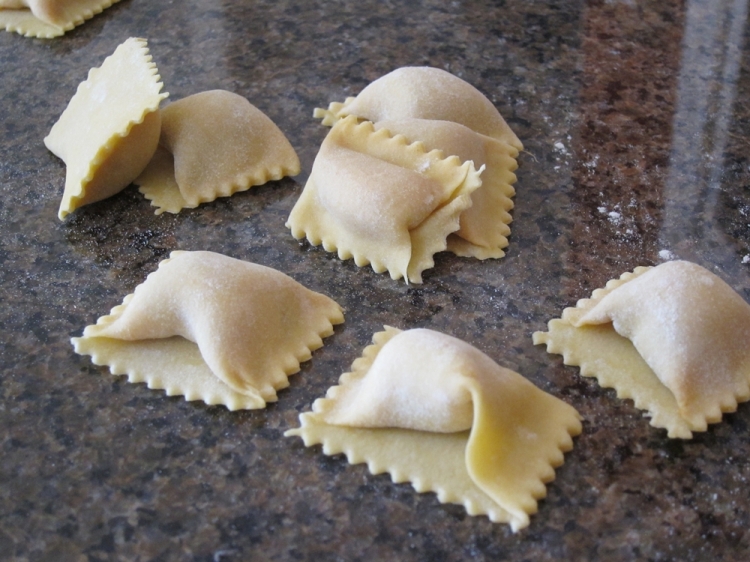 I froze most of the agnolotti for a couple of days, but I did boil a few to test them out for a snack and served them with browned butter and sage leaves. 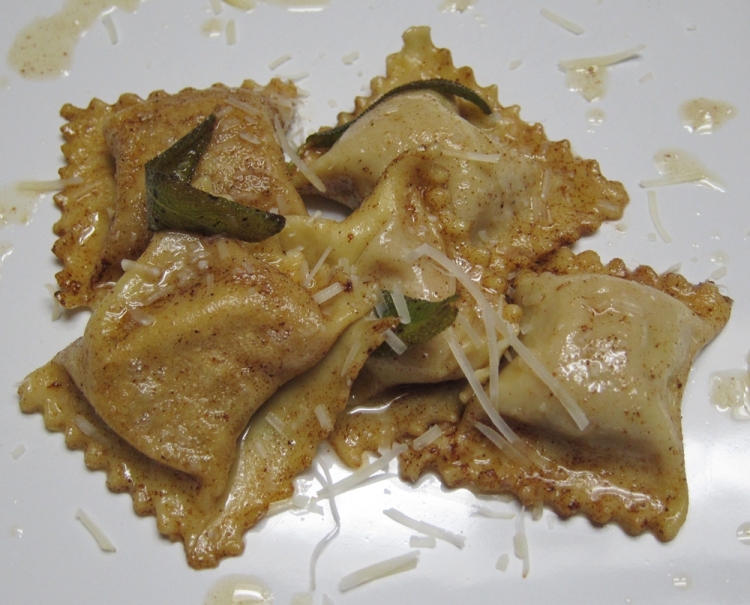 For the rest, I continued with Thomas Keller’s instructions and made a luscious sage cream sauce. This sauce is fantastic and very rich. It is good enough to be eaten with a spoon but since it is made with a cup of creme fraiche and a cup of beurre monte (emulsified butter) that might not be a good idea. To flavor it, some sage leaves are blanched and pureed into the sauce. Keller, of course, asks us to strain the leaves out after that but I really liked how the light green specks looked in there and decided to skip that. The sauce is warmed in a skillet and the cooked pasta gets tossed in and coated with it. After plating a good bit of the sauce is left behind in the pan, so maybe next time I can make half of the sauce recipe so I would not have to waste so much of it. To really take the dish over the top, the plated agnolotti are garnished with deep fried sage leaves, slivers of proscuitto and a little browned butter. Yes, these are spectacularly good, and here they are, The French Laundry’s agnolotti. 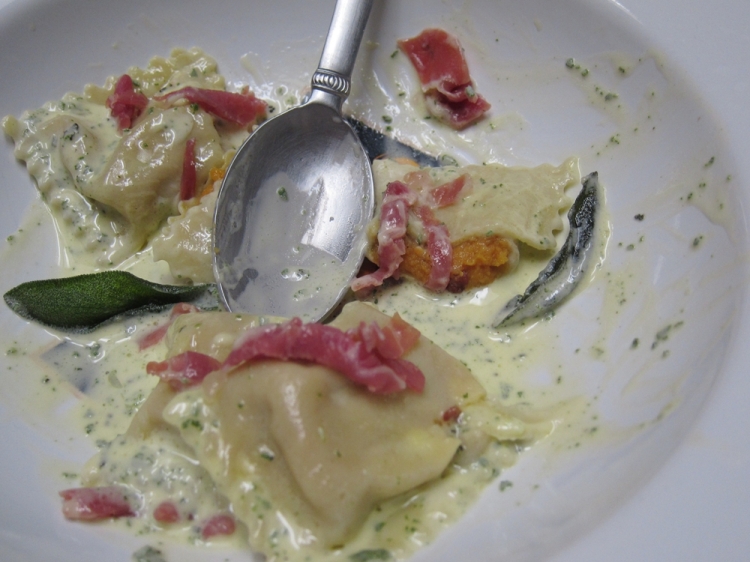