Fish and shellfish stews or soups are a feature in almost every culture that has access to water critters. You can find them in Europe, the Middle East, Far East, North America and of course South America. Many of those are very popular, like French Bouillabaisse but others are much less known. Take this Colombian version of the seafood stew called Sancocho de Pescado. It is common in coastal regions of Colombia and is fantastic and different. It’s made from a base of guiso and a seafood stock. It’s enriched with coconut milk and made very substantial with yuca (cassava) root, yam and plantains. If all that starch is not enough, it is of course served with rice and a good dose of aji (a mix of cilantro, chillies, green onions and lime). 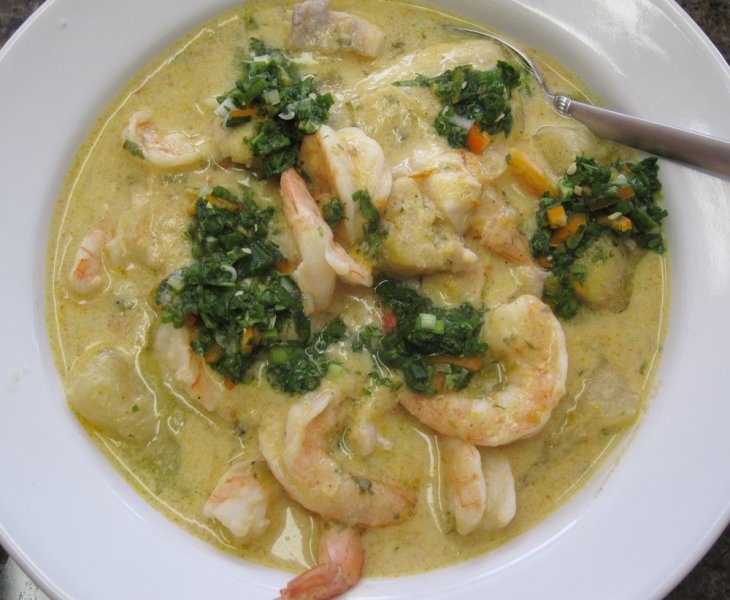 The choice of seafood can vary of course. The basic recipe I used for this one is from a Colombian cookbook and it uses bone in fish steaks. If the Spanish to English translation in the book is semi-accurate, the recipe actually asks for shad fish steaks. I used thick grouper fillets instead and shrimp. The first base to this soup is to make the fish stock using fried shrimp shells and if possible fried fish bones. This makes a very flavorful and rich stock. The other key to success is to make a good Colombian guiso which is a mixture of slowly cooked red onions, green onions, tomatoes, garlic and is spiced with chillies and annatto powder, This stuff makes everything taste better.

Made some fresh Mozzarella. Came out very nice and was really simple to make. It only make sense use on some #pizzanapoletana in the @oonihq
Lacking a donut pan I adapted @halfbakedharvest recipe for baked apple cider donuts with Maple glaze to make mini bundt cakes. I think i overfilled the pan a bit but they came out delicious amd perfect with black coffee
The first recipe I tried from @kenforkish new book #evolutionsinbread is the cover recipe for whole grain bread baked in a loaf pan. Made with yeast and #levain it came out very good with nice flavor and excellent crust and crumb. Possibly Brioche is next.
Chicken and rice loosely adapted from @seriouseats recipe for the Street Cart Chicken with yellow basmati rice, white sauce and hot sauce
Blueberry (with a few strawberries and couple plums I found in the back of the fridge drawer) cobbler
Udon with a soupy beef stew flavored with soy, sake, ginger, garlic