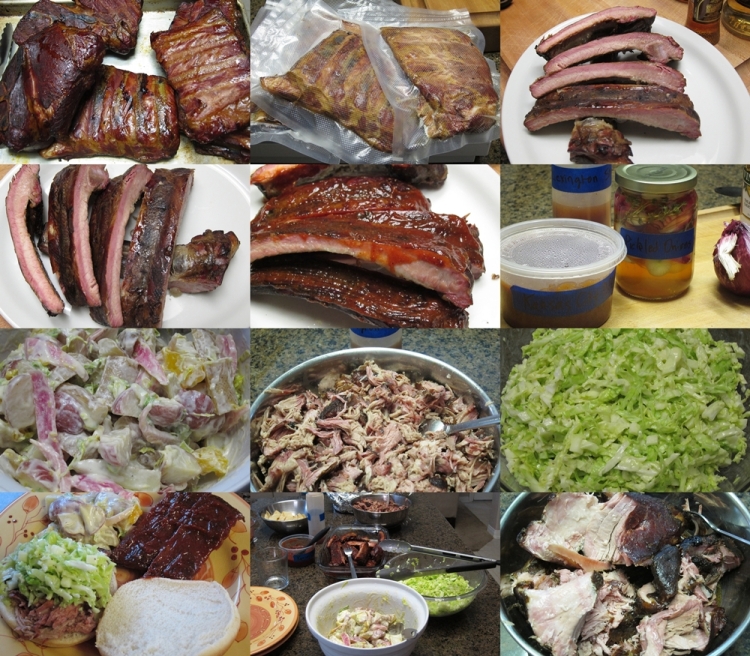 Most probably assume that Modernist Cuisine only makes food that looks like foam or spheres or something extra fancy. Well, sure it has all those things, but that is not the point. It’s just modern food, using all the information that was learned over the past few decades. The point is not to make “weird food” but to make delicious food and to make the most out of every ingredient. Sometimes it follows fairly traditional recipes, other times it completely dumps those processes in favor of better and/or more efficient ones. There are few things as humble and that trigger as much debate as barbecue. Barbecue is simple, really the polar opposite of fancy food. I am talking not about quickly grilled foods, but about slow smoking meat for hours until it is infused with flavor and perfectly tender. I’ve been doing this for years on my Chargriller BBQ and smoker. It works great, but I wanted to see how the modernist approach works. So for the 4th of July this year  I made a whole menu from the Modernist Cuisine books.

The meats I made were two classics, pulled pork (using the butt) and spare ribs. First I lightly salted and seasoned the meat and let it sit in the fridge overnight. Then it was smoked for 7 hours in my smoker using pretty low heat. This step separates the cooking from the smoking. The low smoke and the moist environment deeply flavor the meat with sweet smoke (you can see the awesome smoke ring on the ribs) but they keep it essentially raw. Next the meat goes into FoodSaver bags and is cooked sous vide at 65C for hours, specifically 72 hours for the pork butt and 48 hours for the ribs. That cooking process preserves all the flavor and ensures that the meat is cooked in a moist environment at a proper temperature. The meat will not dry out or burn and will end up wonderfully moist. The end result is delicious and perfect barbecue, especially those ribs. They are not so overcooked that they peel off the bones at the merest touch (“fall off the bone” is not a plus in bbq ribs BTW), but are just tender with the perfect texture.

I made two barbecue sauces, a thin Lexington style one that got tossed in with the pulled pork and a thicker, spicy tomato-based Kansas City sauce for the ribs. Neither one has any specialty ingredients and both can be done in less than 15 minutes. The potato salad was just a little more involved than a typical potato salad but it was so good that I could easily eat it by itself. The salad included fingerling and small red potatoes that were cooked sous vide. It also had “petals” of pickled red and pearl onions (I had made those a couple of days before) and egg yolks cooked to 65C. The yolks are really a brilliant touch. They add lovely yellow accent to the mix, a rich creamy mouthful and a subtle unique flavor. To make them I just cooked eggs with the immersion circulator at 65C. The whites were discarded and the yolks gently cut into 2 or 3 pieces each before getting tossed into the salad. The dressing here is not mayonnaise based, but instead it uses creme fraiche, mustard and walnut oil. The creme fraiche gives it just enough richness and a welcome tang. Lastly I made the White Cole Slaw. That’s just thinly sliced savoy cabbage tossed with green apples dice and an emulsified dressing consisting of another of those 65C yolks, grapeseed oil, buttermilk, vinegar and celery seeds. The slaw is very light and crisp. It worked wonderfully on top of a pile of pulled pork on a bun.