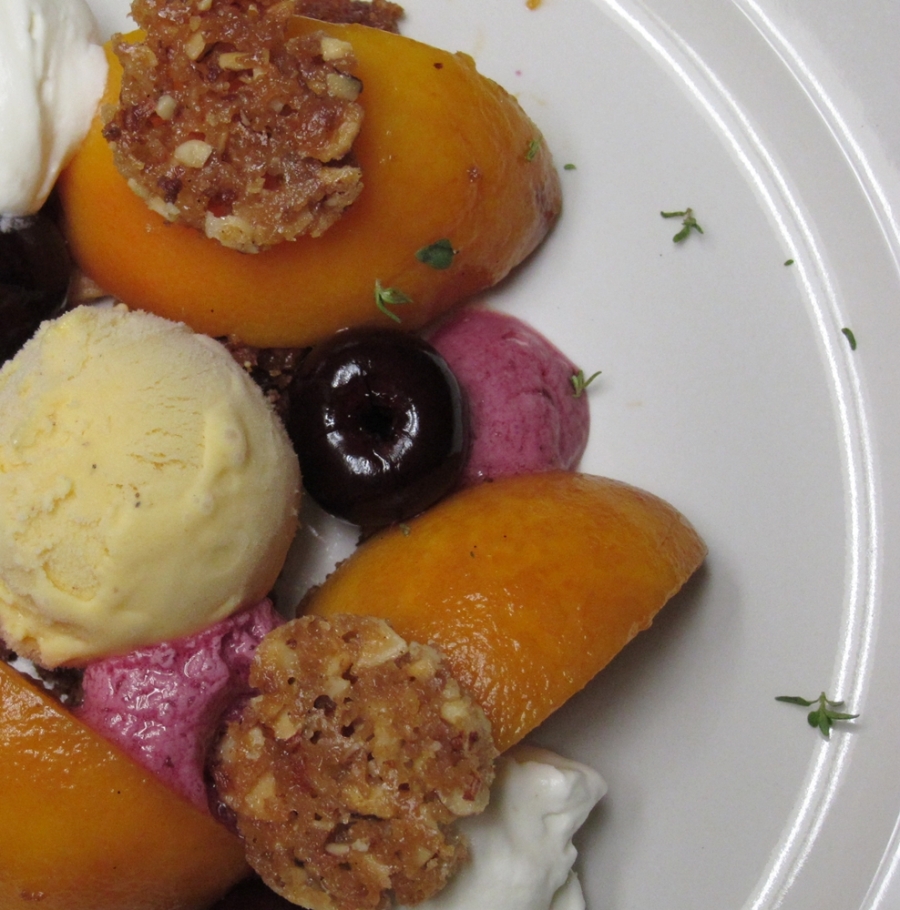 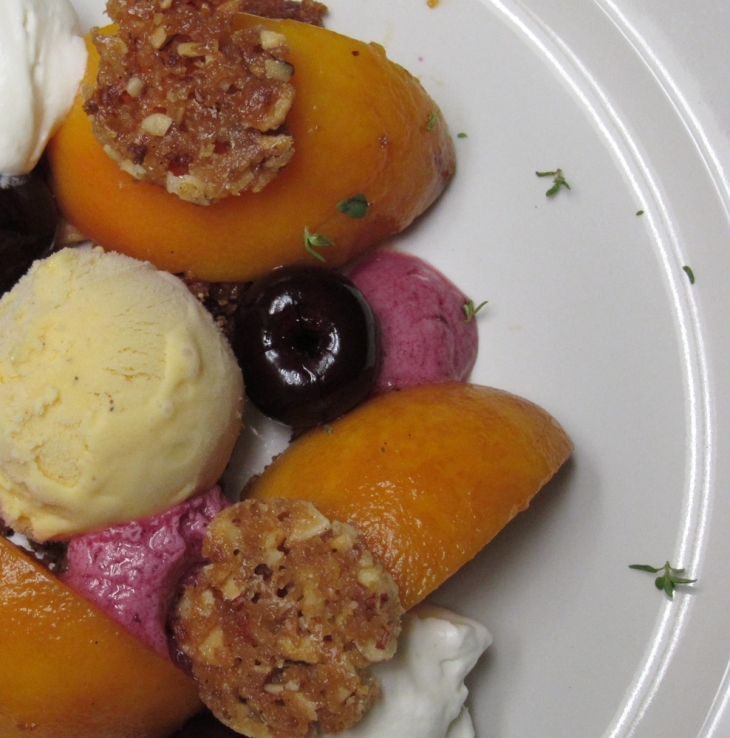 When I think of Texas fruits, two immediately come to mind, ruby red grapefruit and peaches. That’s fairly narrow thinking, since Texas is so huge and offers a large variety of climates and vegetation. It’s those two fruits that always pop to mind though. Recently on a road trip outside of Houston, I noticed a stand (one of several on the sides of the Hill Country area roads) advertising fresh Texas peaches. The couple at the stand had some amazingly fragrant peaches. The fruit was not much to look at, they are not the large plump and blemish free specimens you see at the supermarket. They were smaller. Some were almond-shaped, others were rounder and others somewhere in between, but they smelled amazing and were sweet and juicy. So, I bought a few pounds and intended to eat half out of hand and make some peaches and cream combo with the rest. 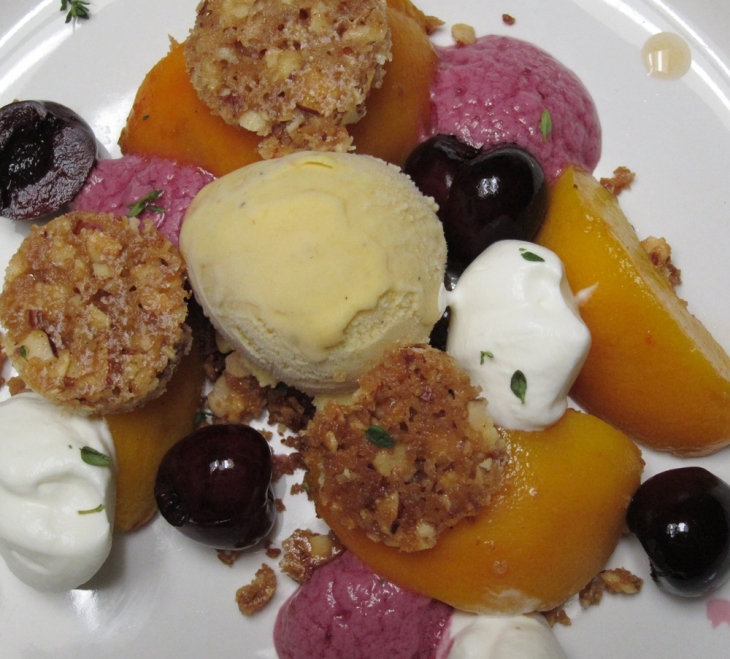 First up was the ice cream. I broiled a few peaches, cut side up until fairly dark and burnished. I pureed those into a classic custard ice cream base along with a few tablespoons of Maker’s Mark bourbon. This made some fantastic burnt peach-bourbon ice cream. I blanched a couple more peaches for a few seconds just to loosen the skin and then peeled them and sliced them into large segments. These were tossed with a little Turbinado sugar so they could macerate for a while before serving.

For a crunchy sweet component I made streusel shards or cookies. This is basically classic streusel made with butter, flour and almonds. Instead of sprinkling it on top of some fruit and baking it like that I spread it in an even layer on a Silpat-lined baking sheet. I topped that with another baking sheet and baked the mixture. As soon as it’s out of the oven and before it turns too hard, I cut it into rough circles with a cookie cutter. 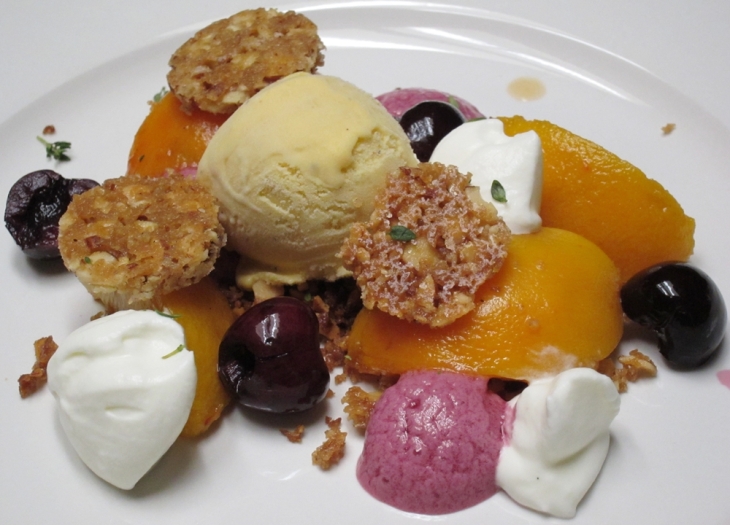 We are in the middle of cherry season and the fruit is delicious, goes great with peaches and is very reasonably priced. So I macerated cherries in red wine, very much like the ones from the calf heart confit dish. I used a portion of their sweet syrup to make a delicate whipped topping. That’s done by mixing the syrup with a little gelatin, pouring it into an iSi canister and charging it with two NO2 cartridges. The NO2 gives the syrup the “foaming action” but without some structure we won’t end up with nice blobs of tasty cherry flavored whipped topping. We’ll more likely end up with something closer to a soda foam. That’s why the gelatin is there. It sets the mixture slightly and gives it the proper texture. In addition to the cherries and whipped cherry topping I also made some plain, lightly sweetened whipped cream. Afterall, this is peaches and cream. 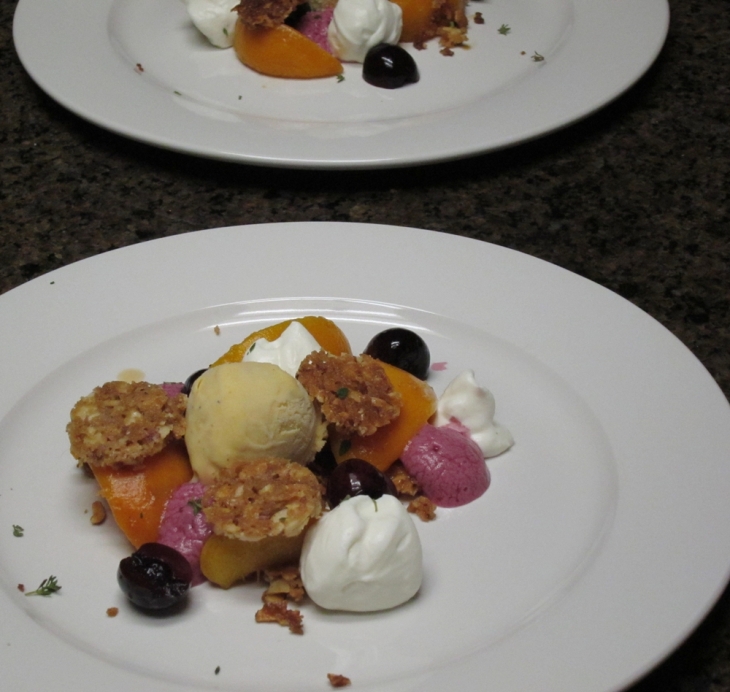 Minestrone of sorts...lots of veggies, chicken stock, cannelini beans with a well toasted garlic rubbed slice of bread in the bowl.
Been playing around making my own koji and trying it in different applications. These pork chops were great. Marinated for about an hour in Shio Koji (fermented koji salt and water mixture) then cooked in cast iron pan.
Grilled yellow tail with soy, ginger, garlic, cilantro dipping sauce
Cantucci, tasty small almond biscotti, adpated from the @viacarota book recipe. Really good with coffee and excellent with a little ice cream and those red wine poached pears from my last post.
Pears poached in red wine with vanilla, orange and herbs
A favorite simple (and usually #vegan) dish is Lebanese burghul and greens with lemon. I change all the time but the basic components are the same.