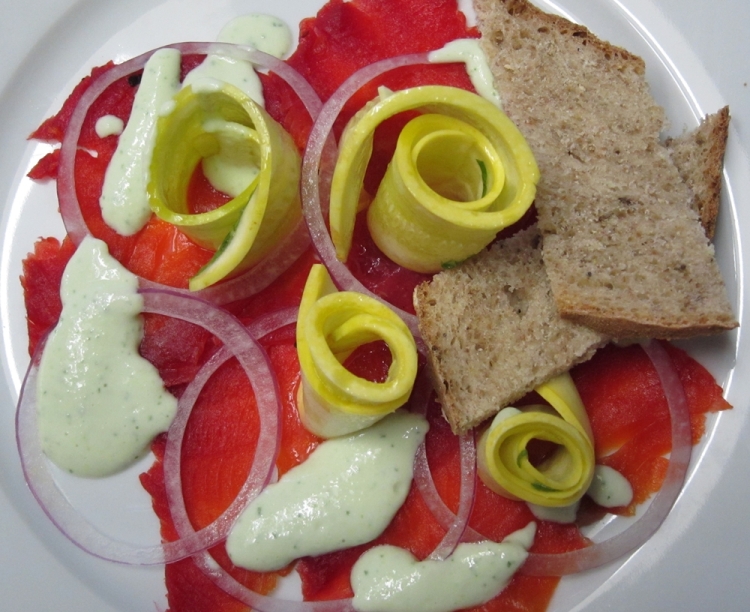 Salmon was the first meat I ever salt cured back when I got Ruhlman’s book Charcuterie. It’s one of the easiest of the cured meats because it requires little investment and very little time compared to a Bresaola or a cured fermented sausage like salami. Basically all you do is rub a salmon fillet with a mixture of salt, some sugar, aromatics and maybe a few tablespoons of vodka or another alcohol. You let it sit for 24 to 48 hours in the fridge and then wipe away all the cure ingredients and pat it dry. Now it is ready to go as is, basically a gravadlax, sliced thin on a bagel or some rye bread. Another option is to maybe smoke it (cold or hot) after it is cured. Diana loves it hot smoked quickly till cooked (I use my wok for that) and served with a simple slaw, crostini and a sour cream/mayo sauce. Yet another way to take the cured salmon to the next level is to brush it with a glaze of molasses and sprinkle it with a mixture of caraway, pepper and coriander. This makes a unique pastrami salmon! 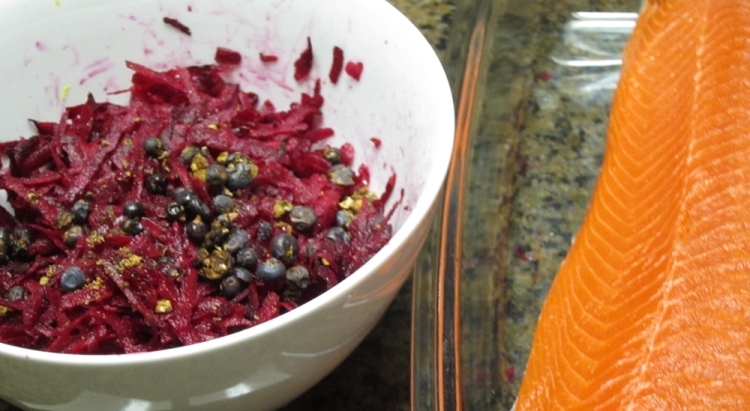 This time around, I borrowed an idea from Jamie Oliver where he cures salmon using a mixture that includes beets and horseradish. The fish had that crazy funky red color from the beets when he prepared it and it just sounded like a good idea. To actually prepare it though I used the proportions from a Grapefruit-Cured Salmon in the Modernist Cuisine books. They use grapefruit zest, lemon zest and juniper. I just eliminated the grapefruit and kept the lemon and juniper. The copper river salmon I used had an amazing color when done curing and all the flavors worked great. I could taste everything, from the citrus zest to the earthy beets.

We ate it for dinner and/or work lunch over about a week period. One way I served it was with some quick lemon-marinated zucchini and red onions. For this dish I made a sauce from pureed chives, cucumbers, yogurt and sour cream.

For another quick dinner I topped home-baked rye bread with the salmon, added some pickled pearl onions and drizzled with whatever was left of that cucumber-chive-yogurt sauce.