Cooking with woodchips and hay (yeah, hay) might seem way weird at first glance. My 8-year old was beyond shocked when I told him that I am buying hay at the pet store (all natural packaged and never used hay that is) to use in cooking  at home. He kept asking and double checking that I am not messing with him. He finally believed me when I covered a baking dish filled with small potatoes with hay and stuck it in the oven. If we really pause and think about this though, it makes sense. Usually stuff like hay or, more commonly, wood chips (oak, charred oak) are used as flavorings in many products. The wood barrels, charred or not, are exactly how products like Bourbon, Scotch and wine are aged and get their distinctive look and taste. Brewers add charred wood chips to stouts and porters all the time for their unique flavor. So why not use some wood chips to flavor a sauce that will be served with a rich piece of pork belly? Hay has been used to cook ham in it for a few centuries as well. I believe this is a classic British preparation where ham is fully covered in hay and baked/boiled. Ryan at “Nose to Tail at Home” prepared a version of that from Fergus Henderson’s book. The process gently steams the meat and flavors it with its unique aroma. All these flavors match perfectly with pork, mushrooms and potatoes to create a lovely and comforting dish. 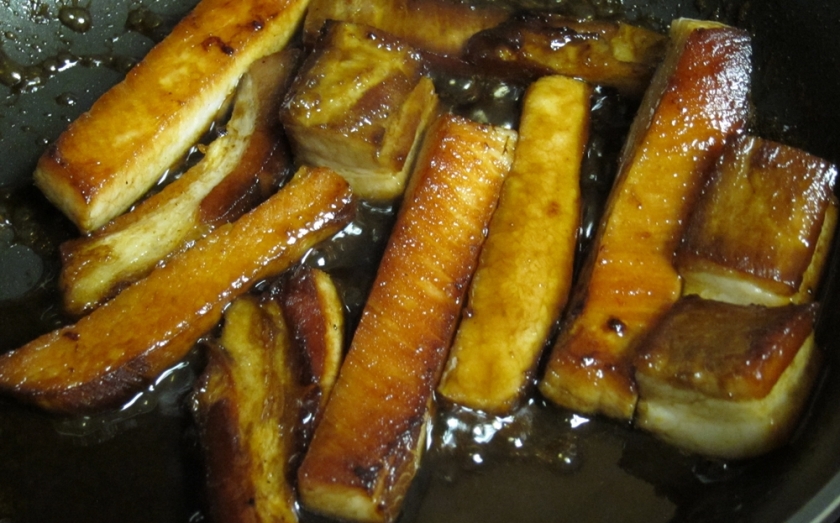 The chef at Noma in Copenhagen uses all kinds of interesting ingredients in his flavor profiles including oak chips, spruce, hay and ash (as in burnt and powdered vegetable matter). His cooking is fiercely local and when your locale is cold northern Denmark you really do not have access to so many of the ingredients we take for granted these days like tomatoes, olive oil, chocolate…Still Chef Redzepi manages to coax flavor from products, both wild and cultivated. He obviously knows what he is doing because he produces beautiful thoughtful food and Noma is named the “Best Restaurant in The World” for the second year in a row. In this dish he combines braised de-boned pork tails with hay-steamed small potatoes and a sauce made from stock, cep mushrooms (porcinis) and flavored with applewood chips.

I did not have any pig tails for this, but I did just make some smoked bacon (two versions this time: maple and brown sugar) and I had a few pieces of thin pork belly that did not get cured. Speaking of bacon, here are a couple of nice shots of said cured bellies. You can also see some of the Canadian bacon I smoked along with the regular bacon 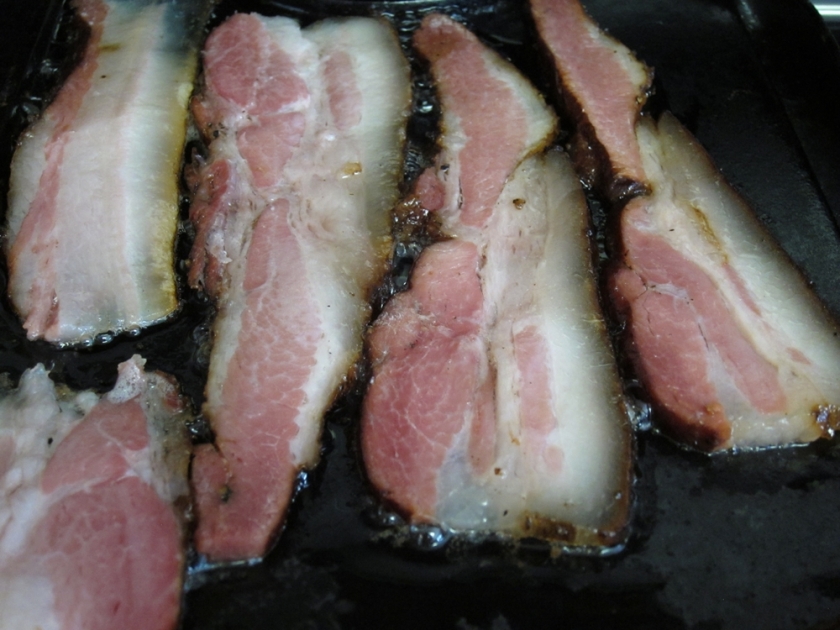 I bagged the pork -I pretty much buy all my pork from Yonder Way Farm these days, it really is great stuff- with some home-brewed stout, thyme, butter-sauteed vegetables and stock then cooked them sous vide for a few hours. The cooking liquid is then strained and reduced to a glaze to finish the pork.

Redzepi uses two kinds of small potatoes, a purple one and a yellow one. These are baked gently under a few handfuls of hay. When done, I cut each in half and scooped most of the flesh out. Right before serving the potatoes are heated up in a water and butter emulsion and plated. The water had some toasted wood chips soaked in it to flavor it before whisking in the butter. The sauce for the dish is a clear mushroom bouillon made by simmering sautéed mushrooms and vegetables in chicken stock. The resulting stock is then clarified using the traditional method for making consomme (i:e using egg whites). The clear liquid is then reduced to about a cup. To further flavor the already very tasty bouillon, a few applewood chips are toasted and then soaked in it for 10 minutes. Lastly, birch wine is supposed to be added in as well. I had none and could not find any at local stores. So, I decided to just go by my own taste and seasoned the bouillon with my homemade maple vinegar. It worked very nicely.

Another two items emphasize the cep flavor, an oil and powdered ceps. Redzepi uses fresh porcini trimmings to make the oil. These are very hard to find and expensive. The dried version though is available everywhere and makes a great substitute in an application like this one. The oil is just heated up and the dried mushrooms are steeped in it. The cep powder is just dried mushrooms pulverized in my spice grinder. That would be the dust-like substance all over the plate. All in all this was a delicious dish to welcome Autumn. It’s rich, full of roasted umami tastes, mushrooms and rustic flavors. The wood chips do add a nice mild flavor. The hay…not too sure honestly. I think that might be more noticeable if the dish they are cooked in includes a lot of liquid, like the ham in hay dish I linked to above. As a cooking medium for the potatoes, I do not think they contributed much.