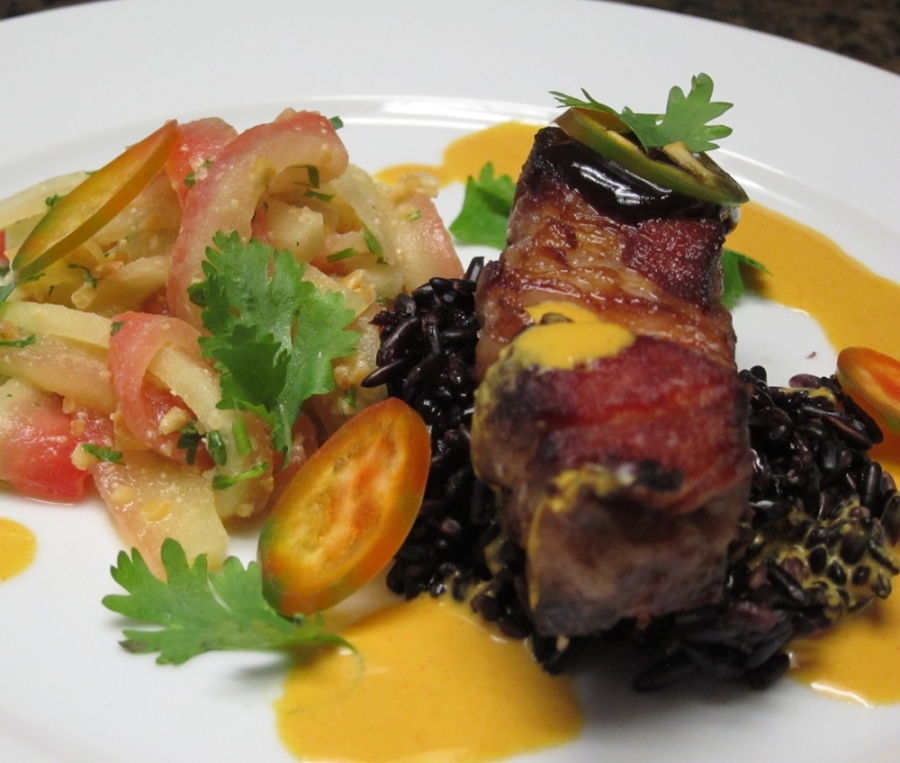 Thai curries are one of my favorite south Asian foods that I don’t cook as much as I should. Every time I make it at home from scratch by pounding (actually, usually I use the food processor and then finish the paste in the mortar) together chilies, lemongrass, shallots, galangal and a host of other ingredients I tell myself that I really should do this at home more often. This time with this dish it is no different. It’s a piece of crispy fatty pork, black sticky rice (I like its other name though: forbidden rice), a nice salad of marinated and seasoned watermelon and a rich red Thai curry paste in coconut milk.

The watermelon salad here was inspired by a post on the Ideas in Food blog. It’s a take on the Thai green papaya salad. That’s usually made by finally shredding unripe papaya when the fruit is still green, crunchy and a little tart. It’s then mixed with mashed garlic, some dried shrimp and fish sauce. To make it more substantial, David Thompson in his book Thai Food, tops it with caramelized pork belly! For the watermelon version here, I used the part of the fruit that has a lot of that white pith closer to the green peel. I cured it by sprinkling the slabs of the watermelon with salt and Thai palm sugar and vaccum packing it in FoodSaver bag. After sitting in the fridge for a good 12 hours, I sliced it thinly and dressed the fruit with fish sauce, lime juice, garlic and chopped peanuts. 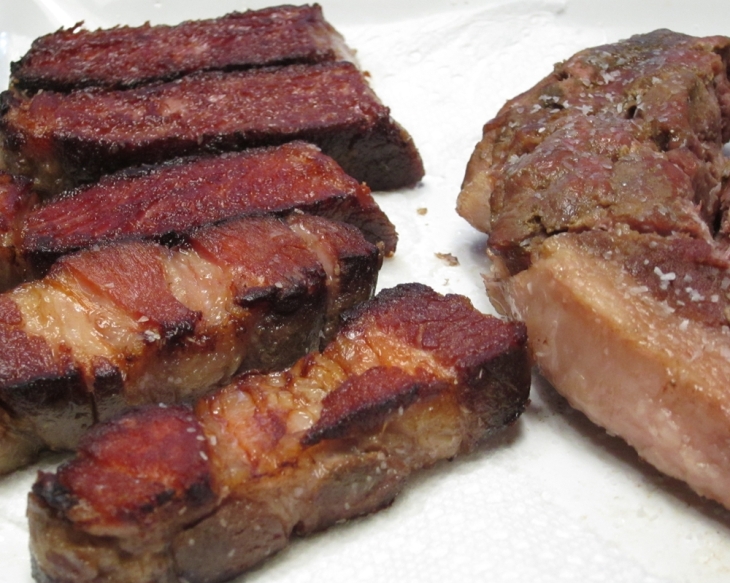 To make the pork, a tasty shoulder from a free range pig, I seasoned it with salt and sugar and cooked it sous vide for a long time (about 48 hours). Right before plating it, I cut the meat in long thick strips and crisped it in hot lard. Good quality pork cooked like that is tender, juicy and delicious. I enjoyed a couple of pieces on their own before picking the few I was going to actually plate. 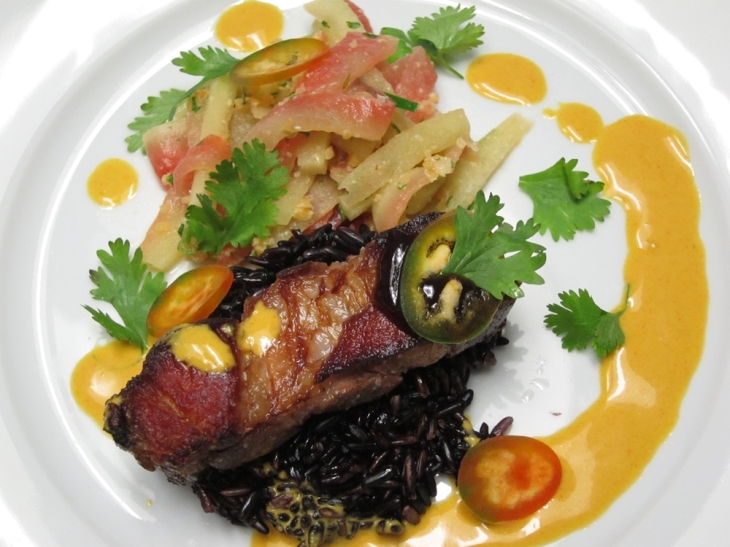 The rice got a good soaking and then it was steamed to cook it. The rice ends up perfectly cooked with a nice toothsome texture. The taste is very nutty and can stand up to the strong flavors of the curry and the watermelon salad. This rice also makes a wonderful traditional south east Asian dessert when cooked with palm sugar and coconut milk.

The curry paste is also adapted from Thompson’s Thai Food. His recipe for a traditional red paste includes a lot of dried chilies that give it its red brick color. Since my wife does not like spicy food I cut down the quantity of the chilies significantly and used a large red bell pepper instead. That kind of messes with the balance of the paste and to make up for it I upped the amount of lime juice in there as well as adding a tablespoon or two of paprika. Not very traditional additions, but the paste was very nicely balanced in the end. To prepare the curry  sauce I needed to separate the coconut cream from the milk and use that fat to cook the paste before adding the rest of the milk into the pot. To do that I chill the can of coconut milk so the cream can solidify on the surface slightly. Then it’s a matter of spooning the cream off and heating it in a pan until the oil separates. I added half the paste (the rest went in the freezer for later) and fried it for a few minutes. Then I added the rest of the coconut milk along with a little stock to thin it. That transforms the red paste into a nice deep yellow sauce.

The pork, curry, nutty rice and watermelon with a garnish of chilies and cilantro made for a delicious dish but I still had a good bit of curry sauce and rice leftover. I wanted to use it that same weekend with a fish or shrimp dish. Fresh water fish like catfish or Tilapia work really well here and I used the latter. I cooked the fillet sous vide to the perfect tenderness. I plated the fish on top the black rice in a pool of the curry sauce and several dollops of a green cilantro sauce. The sauce made with blanched cilantro and a little basil, pureed with very little water and Ultratex-3 to thicken it. I did make a little pungent garnish for this one with thinly sliced shallots, lime juice, chilies, and fish sauce. It was every bit as good as the pork dish (well, almost…Tilapia cannot compete with great porcine!). Too bad I did not have my camera when I made this one, so all I got is this phone photo. 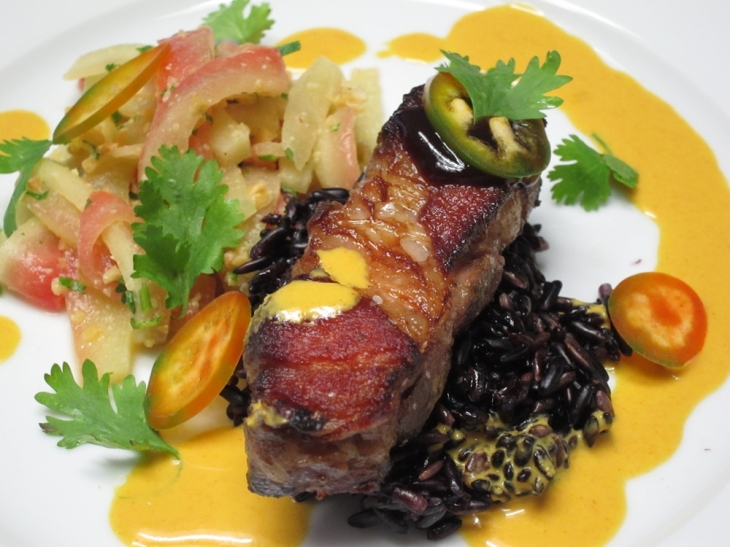