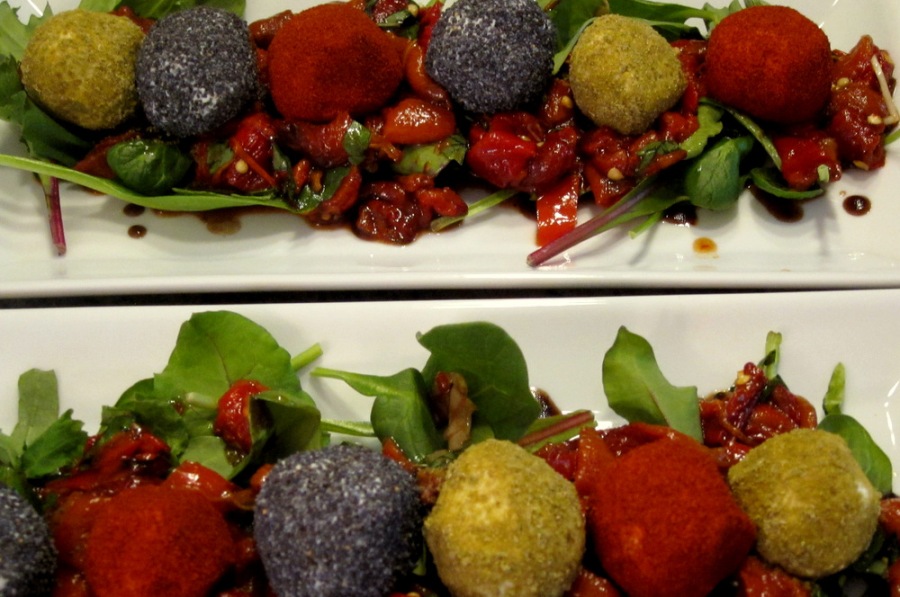 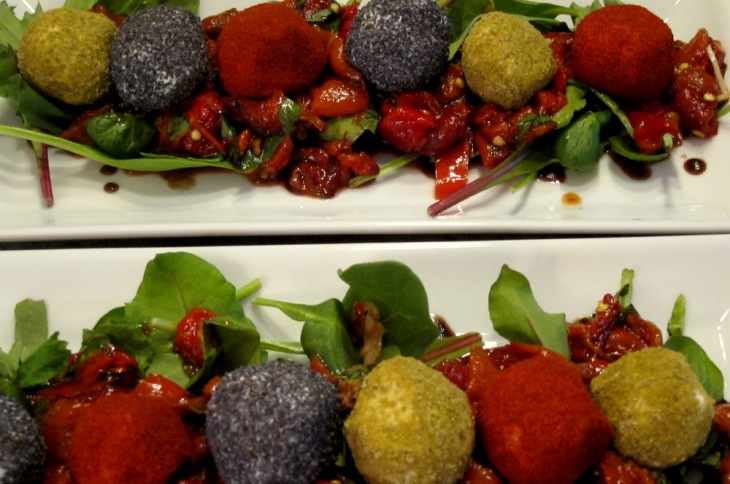 I’ve made this dish from Mario Batali’s Babbo book several times over the years but I’ve never posted about it. Here’s the post to rectify that because this simple antipasto is so worth it. It never disappoints in the effort to result factor. Guests love the look and the flavor while the effort involved in making them is pretty low.

The most time consuming part of this whole dish is the peperonata. That’s just a fancy Italian word for marinated peppers. In the book, Batali just sautees the peppers and seasons with sherry vinegar, salt and pepper. I’ve done them like that and they work fine but I prefer to use roasted peppers. So, I broiled the peppers until they are charred and then peeled them. These were then briefly sauteed to heat them through and tossed with sherry vinegar, salt and pepper. 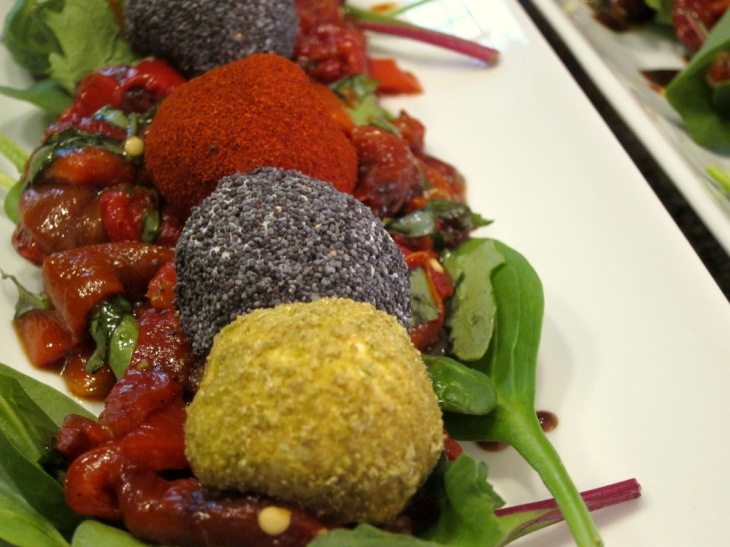 I have tried many ways to “roast” and peel sweet bell peppers but I use two methods primarily depending on what I need to use them for. My go-to method is to broil them in my oven (or on the grill if I have it going), put them in a bowl and cover with plastic wrap to let them steam and cool a bit. I never wash them as some recipes suggest you do to get the peel off. I feel that is not necessary and causes some flavor loss. I can live with a few bits of charred pepper skin on my bell peppers. Another method that I use sometimes is to char the skin all over with a torch. This is good when you want peppers that are pretty much still raw but can also be peeled easily. I also let them rest in a bowl after charring with a torch. These semi-raw peppers work great if you want to stuff them or in any way cook them a bit more. 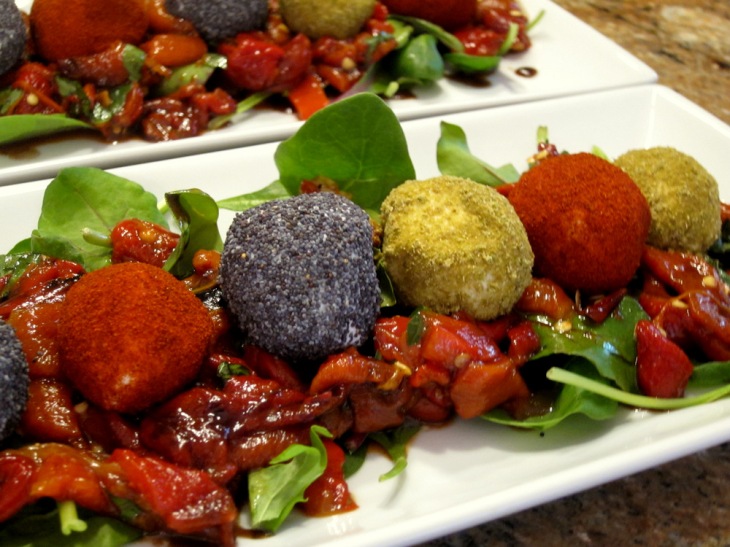 The “truffles” are made by mixing the goat cheese with a bit of Parmesan cheese and sometimes a small sprinkle of pepper. The mixture then is formed into small balls resembling truffles and rolled in a variety of seasonings. The typical trio of seasonings I have here is poppy seed, ground up fennel (or fennel pollen if you have it) and paprika. Anything could work though, but you do want something a bit robust to stand up to the sharp cheese and tart peperonata. To plate it I put a layer of arugula and top with the peperonata then on top goes the truffles with alternating colors. I served them family style here for our guests but another elegant presentation is to serve three truffles per person on a plate on top of the greens and peppers. Serve them with toasted rustic bread rubbed with garlic and you have a perfect and beautiful antipasto.

Made some fresh Mozzarella. Came out very nice and was really simple to make. It only make sense use on some #pizzanapoletana in the @oonihq
Lacking a donut pan I adapted @halfbakedharvest recipe for baked apple cider donuts with Maple glaze to make mini bundt cakes. I think i overfilled the pan a bit but they came out delicious amd perfect with black coffee
The first recipe I tried from @kenforkish new book #evolutionsinbread is the cover recipe for whole grain bread baked in a loaf pan. Made with yeast and #levain it came out very good with nice flavor and excellent crust and crumb. Possibly Brioche is next.
Chicken and rice loosely adapted from @seriouseats recipe for the Street Cart Chicken with yellow basmati rice, white sauce and hot sauce
Blueberry (with a few strawberries and couple plums I found in the back of the fridge drawer) cobbler
Udon with a soupy beef stew flavored with soy, sake, ginger, garlic