We shot a limit of teal (small ducks) this year on one of our trips. It was two of us and my buddy did not want to take his share and deal with the clean-up. I was happy to take his share of the hunt (even if I am never happy about the cleanup of about 12 ducks). In any case I had a good mess of birds in my freezer, mostly plucked clean but with several skinned and portioned out into small legs and breasts. It’s also been a while since I made a terrine of any sort and it really is the season for that kind of stuff. So a terrine of teal (and one bigger bird from last season) it was.

I have tons of recipes for terrines and pates, but for this one I looked to a little book that I love reading and cooking from, Richard Olney’s Simple French Food. The late Olney is also the author of the many of the Good Cook series of books including one I’ve mentioned before and own called Terrines, Pates and Galantines. His writing in Simple French Food and The French Menu Cookbook is clear and passionate. These are really classics with no frills, no pictures, great opinionated essays and recipes that teach and work. Either one is a great addition to any foodie’s bookshelf.

Olney does not have a recipe for teal terrine in his book but he does have one that caught my eye for Terrine de Lapin, rabbit terrine. I could have used one of several other recipes from other books including Terrines, Pates and Galantines, but as I mentioned before I just love reading and cooking from Simple French Food. It’s that kind of book that makes you want to get in the kitchen and make something. I basically used the duck in place of the rabbit. Some other changes I made was to make the seasoning a bit more aggressive since duck, especially wild duck, is more gamy than rabbit. Instead of marinating and grinding all the duck, I followed Olney’s instruction to marinate the meat in a mixture of white wine and herbs but I reserved the breasts after marinating and seared them to use them an inlay in the center of the terrine. The remaining duck meat was ground up with some pork shoulder to start making the forcemeat. 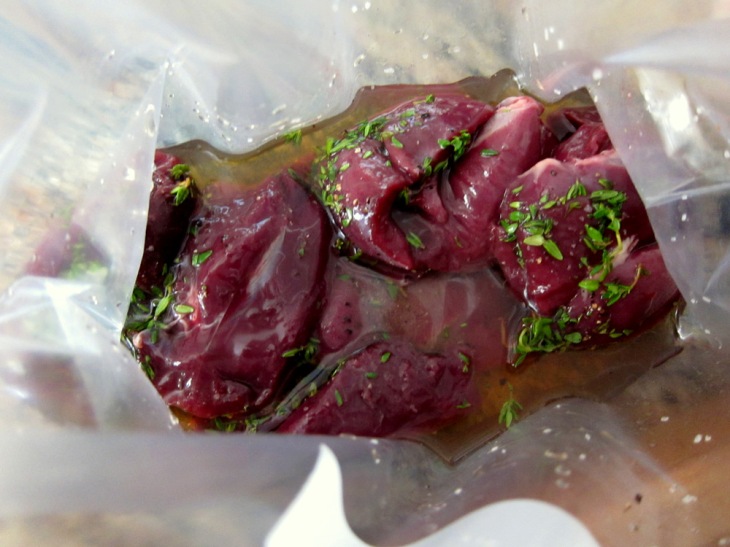 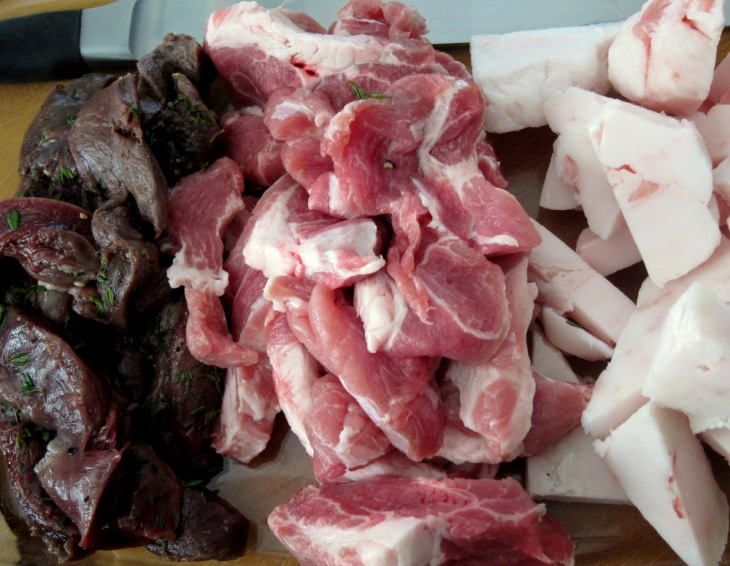 The terrine usually needs a small amount of a liquid-ish component. This can be composed of milk, cream, stock or even water mixed in with seasoning and bread to make a paste (known as panade). For this recipe I used the duck carcasses to make a stock in my pressure cooker. I first roasted them and then deglazed with Madeira and a bit of Sherry vinegar before cooking with mirepoix and thyme on high pressure for about an hour. This made about 4 cups of stock. I then reduced it to about half a cup of concentrated meaty goodness. This got mixed with a mashed a garlic clove and chopped up bread to make the panade.

I ground up the mixture into both fine and coarse portions that got mixed together along with pork fat, pate spices, panade and pistachios. I used the KitchenAid mixer to get the forcemeat really emulsified and bound together well. Half of that went in a plastic wrap-lined terrine pan and then in went the seared duck breasts and then the remaining forcemeat mixture.

Traditionally a terrine is cooked in a bain marie (basically a water bath in the oven). The idea, just like cooking a flan or custard, is to gently heat the mixture and not allow it to break with all the fat and juices running all over the place. Well that is really sous vide cooking old-style. So for the past couple of years I’ve been using my immersion circulator for that. I wrapped the terrine with plastic wrap and then vacuum packed the whole thing using a FoodSaver. The package cooked at 63.5 degrees C for about 3.5 hours. The other plus with this method is that the finished terrine is already wrapped and pasteurized. It can be cooled in an ice bath and go into the fridge. It also needs no pressing with a weight to compress the meat and remove any air bubbles.

We ate this over a period of a week or so with good bread and various accompaniments like mustard, ale chutney and cornichons. I also loved it served up with pickled prunes, homemade coarse mustard and fermented pickled okra. The strong pickle flavors worked very well with the mildly gamy meat. I do want to add some curing salt (Sodium Nitrite, Cure 1,…) next time around to give it a more attractive pinkish hue and cured flavor. I forgot to do that this time around.