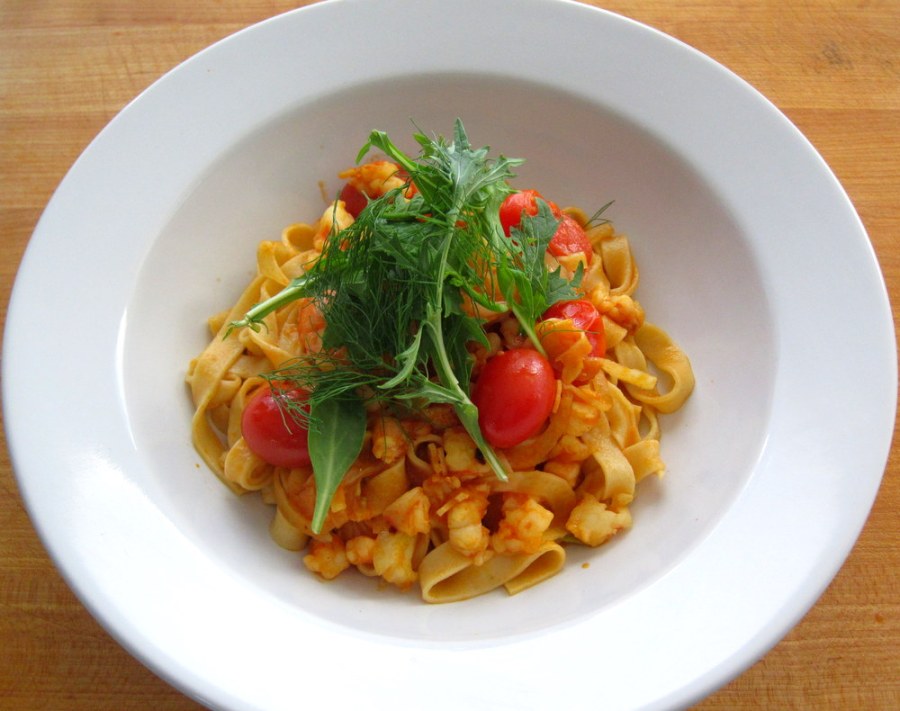 Jamie Oliver is one of the first ever chef/celebrity who I’ve learned a lot from early on and still really enjoy using his books and cooking style as an inspiration. His recipes rarely disappoint and I think his passion is infectious. This is a dish that sounds so 80’s from his Jamie’s Comfort Food book. However, when properly prepared there is no doubt that it falls under the heading “classic”.

The instigator to making this dish was my mom. I asked her what she wanted me to cook for dinner one day so she can take a break and she mentioned shrimp. After looking through a couple of my books she immediately decided on this one upon seeing the picture. After all it combines two of her favorite food groups, pasta and shrimp.

Homemade pasta, a wonderful food, can be a simple flour+egg mixture and lots of times that’s what I do. The ratio of flour to egg, using whole egg as opposed to yolks or maybe a combination of yolks, whites and even oil and water. I’ve been messing with the Modernist Cuisine pasta dough for a while now and really like it. It has a nice al dente texture when cooked. Due to a the small percentage of Xanthan gum in there it is very easy to work with without sticking or requiring too much additional flour. It is not really “better” than the traditional pasta dough, just different. Actually, I much prefer a classic dough if making filled pasta like Agnolotti for example. This version works very well here when you want a sturdy, snappy noodle that is still tender and rich. It is another process and cooking technique that has its place in my kitchen.

I include the recipe for the pasta dough in the bottom of this post. It is not a direct lift from Modernist Cuisine, rather it is adapted from the Modernist Cuisine at Home book with a few changes including the incorporation of semolina in the mix. It works very well but I will probably change something next time I make it. That’s the nature of cooking, change, evolve, test and then do it again. There is almost always room for improvement or customization. An  idea could be to include different flours instead of semolina depending on the sauce, like buckwheat or rye or corn flour….

The other half of this recipe is the sauce, a rich a deeply flavorful one based on shrimp shell stock. I peeled the shrimp and de-veined them. The shells get sautéed in olive oil with onions. These get cooked with saffron threads, wine, canned tomatoes and anchovies for an extra briny kick. The sauce gets pureed and very well strained. This beautiful shrimp sauce is now ready to go into the final dish.

As the pasta is cooking away I sautéed some garlic and very thinly sliced fennel in olive oil. Earlier when I cleaned the prawns, I chopped most of them and some were left whole for a nice garnish. When the vegetables are soft, I added the prawns and a few handfuls of cherry tomatoes. Last, in goes the prawn sauce. To finish, I toss the al dente cooked pasta in the prawn sauce mixture, plate in warmed plates and garnish with fresh fennel fronds and the whole tail-on large shrimp. Truly a luxurious, delicious and comforting dish.

Adapted from Modernist Cuisine at Home

Mix in a stand mixer and allow to hydrate for an hour before rolling and cutting.