This is a very good combination of flavors that I tried out in two separate desserts, both are delicious, both imperfect and need some tweaking. The first one is another lift from Daniel Bouloud that features a disk of crunchy chewy pistachio dacquoise with whipped cream and poached plums with a scoop of pistachio gelato. The original recipe uses cherries instead of plums.

Making a pistachio dacquoise is pretty much the same as the dacquoise for one of our favorite cakes. A mixture of pistachio powder, pistachio paste and sugar is combined with whipped egg whites. This mixture is baked until browned and mostly crispy but not brittle. When done I cut it into roughly 2 inch circles and a few smaller ones for  the ice cream.

Bouloud actually does not cook the cherries in his recipe. He just marinates them in a hot syrup. That would be fine for cherries but I had other plans for the plums. I cooked them sous vide with blueberry syrup.  The syrup is just blueberries, water and sugar simmered, mashed and strained. I bagged the sliced plums with the purple syrup and cooked it at 82 C for about 30 minutes. 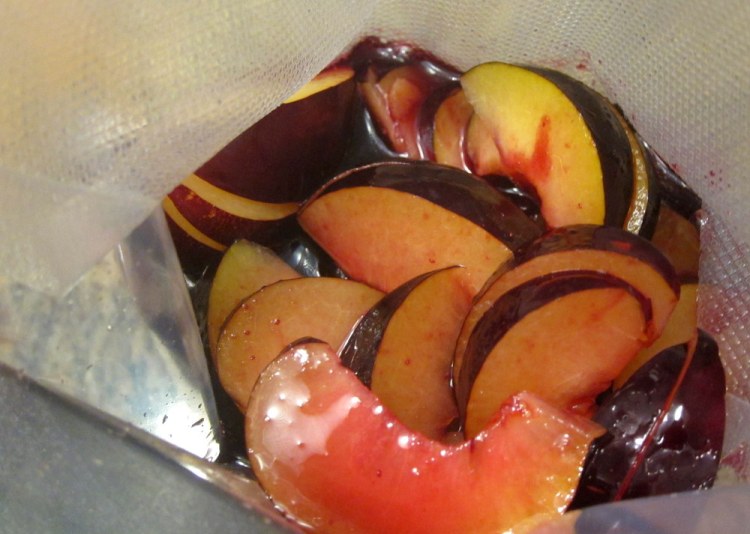 I liked how this worked out very much. The plums took on the amazing color from the syrup, they cooked perfectly without being mushy and had nice hints of the blueberry. It is obvious from the pictures that the plum took on a much deeper ruby color after cooking. I strained the cooking liquid and reduced it as well to make a simple sauce for the dessert.

Now where the recipe failed is the pistachio ice cream. Bouloud’s recipe makes for a very thick ice cream base with lots of pureed pistachios. The end result had a good flavor but was closer to frozen pistachio butter than creamy smooth ice cream. To plate it I put a disc of the cookie and layered the poached plums in top. I whipped some cream with cherry liqueur and vanilla sugar then piped a nice rosette on top of the plums. A scoop of the mediocre ice cream goes along the side and a few drizzles of the reduced plum sauce.