Recently I needed to cook some pork chops for dinner. These are delicious thick ones from free-range pigs courtesy of the local Yonder Way Farm. It was mid-week on a school night and I needed them to be cooked pretty quickly for dinner along with some fried rice. No time for sous vide-ing for an hour and searing and such. I seasoned them, heated up my wok outdoors with an inch or so of oil and shallow fried them for a few minutes on each side until perfectly cooked at 140 F in the center. Boy were they delicious! I’ve been cooking them with this method that ever since whenever I can. 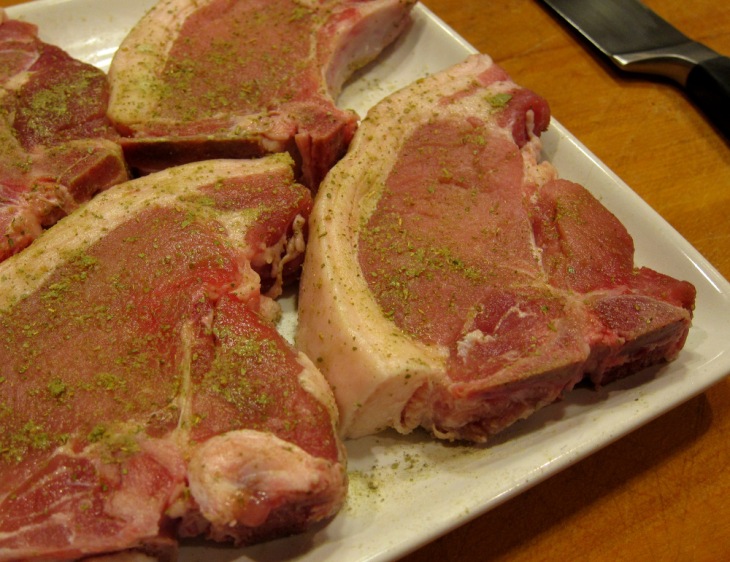 This particular dish and combination is from a Jamie Oliver recipe, a simple meat and potato dish. What makes it a bit more special is the sage salt rub, the cool potatoes and -if I may toot my own horn a bit- my method of wok cooking the chops. Oliver uses fresh bay leaves for the rub, but I had none and dried ones work very well. I ground up the bay leaves along with fennel seeds and salt in my spice grinder and rubbed that all over the chops.

As the chops sat getting all seasoned up, I prepared the purple potatoes. These are really cool looking tubers. They honestly do not taste much different than your average Russet potato, maybe a tad sweeter. They do have a great color and pattern when raw and make for a purplish blue mash.

I first boiled them until soft along with some garlic. Judging by the color of the water at the end,  I’m thinking next time I will steam them and see if I can retain more of the color. In the meantime, I rendered several pieces of pork fat taken from the edges of the chops. I used a cast iron skillet in the oven to do that. There was a good 3 tablespoons or so of rendered pork fat at the end along with crispy pork cracklings. When the potatoes where done, I tossed them in the hot pan with the fat along with a pinch of salt and roasted them until browned and crispy. Towards the end I gently smashed them up to get soft potato mixed in with the crispy surfaces.

Cooking the chops in the wok takes maybe 10 minutes or so. I heat up the wok over a medium-high heat. I use my outdoor propane burner (turkey fryer kit) for all frying, deep frying and stir frying. I add about an inch of oil in the wok bottom and add the chops with one in the center and the remaining around it and up the wok “wall”. After a couple minutes I move them around so that another chop is in the middle and so on. I flip them over and do the same thing. After resting for a few minutes, the chops are good to go. 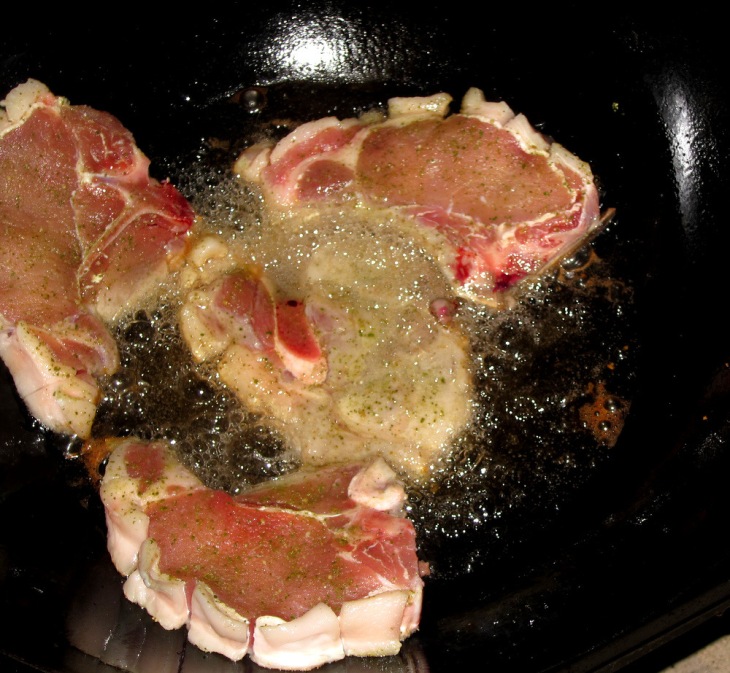 For the sauce, I sauteed a little chopped shallots and added hard apple cider. After the mixture reduced I added a spoon of grainy mustard and chicken stock. I allowed that to reduce and stirred in chunks of butter. I plated the chops over the potatoes, added a few pieces of the crispy cracklings and a dollop of creme fraiche. 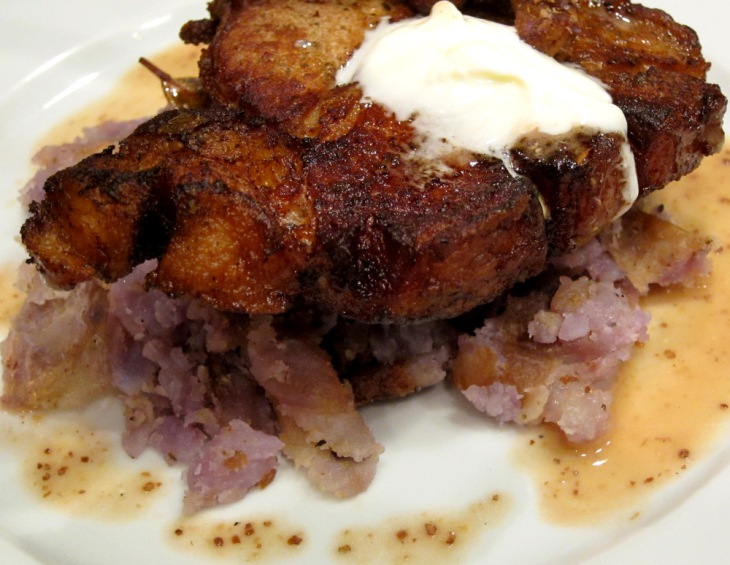 One thought on “Pork Chops with Sage Salt, Purple Potatoes and Cracklings”

Cantucci, tasty small almond biscotti, adpated from the @viacarota book recipe. Really good with coffee and excellent with a little ice cream and those red wine poached pears from my last post.
Pears poached in red wine with vanilla, orange and herbs
A favorite simple (and usually #vegan) dish is Lebanese burghul and greens with lemon. I change all the time but the basic components are the same.
Tacos last night so beans, eggs, salsa, Guacamole and tortillas for #breakfast
Tacos Saturday
Venison leg from @mauinuivenison cooked on the grill over charcoal. Flavored it like a beef Shawarma (cumin, allspice, onion, garlic, red wine...) and it worked great. Served with tahini sauce, flatbread and veggies. This has been our favorite way so far to cook this meat