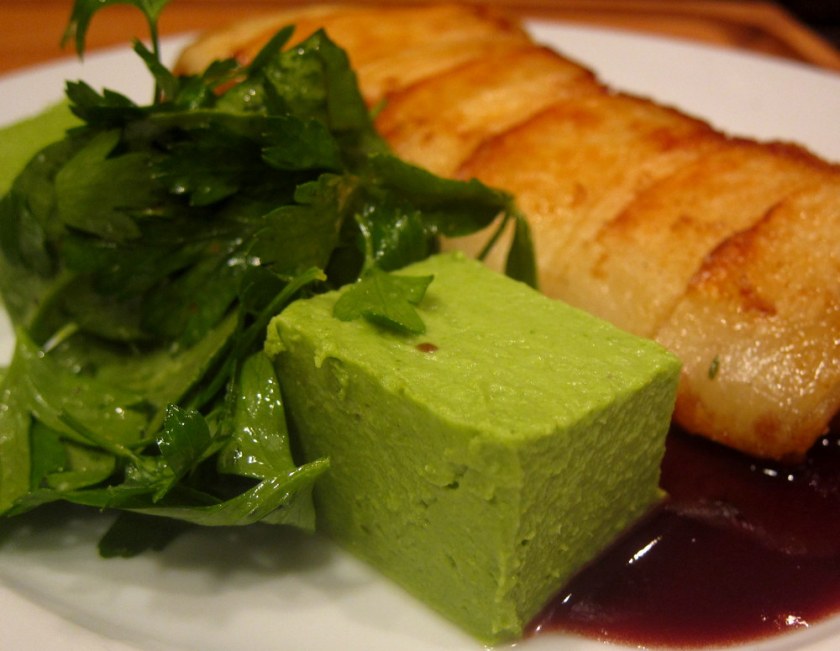 One thing off the top here: Leek royale is awesome velvety delicious stuff. Ok, now that I’m done with that, the rest of this dish is very good too even if my execution is not as ideal or refined as I would’ve liked.

Chef Daniel Bouloud made this, a version of it actually, popular when when he was working at Le Cirque. At his restaurant, Daniel, he kept the popular dish in spirit but updated it a lot. In this version here I am doing a hybrid of sorts. The classic original is a fish, usually sea bass, wrapped in thin slices of potato and pan fried in butter. It is then served on top of sauteed leeks with a rich red wine sauce. 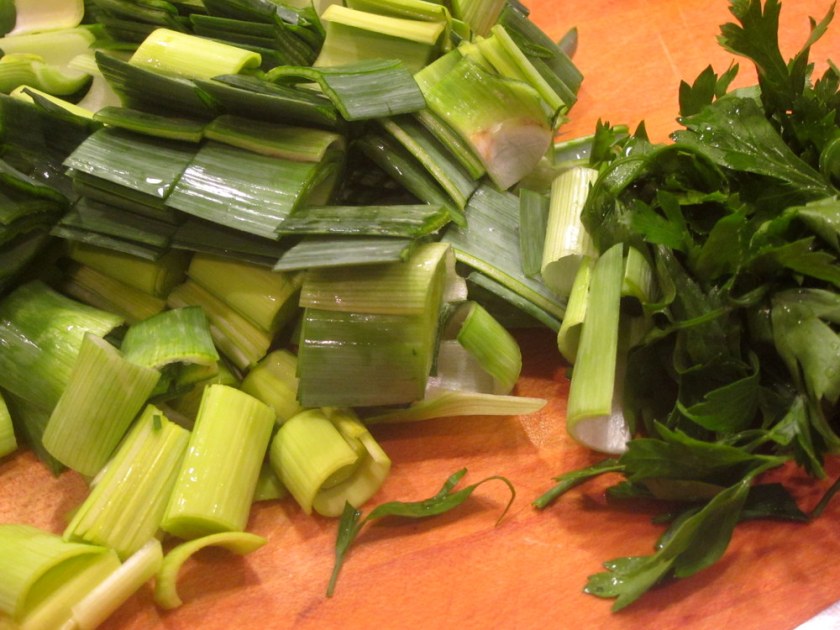 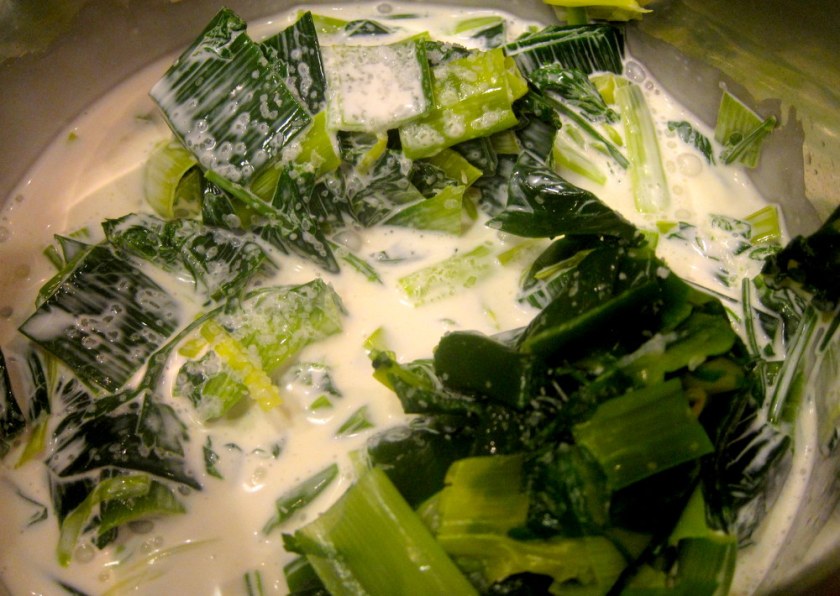 In his book, Daniel: My French Cuisine, we get the updated version of the classic. It’s a steamed bass fillet with potato lyonnaise “rolls”, a rich leek custard (the aforementioned royale) and the classic red wine sauce, a Bordelaise. I started working on the recipe with the leek custard because that takes the most amount of work and needs to set in the fridge. I simmered the green part of the leeks along with Italian parsley until tender. I then cooked the drained greens in some cream and blended the whole thing, strained it through a fine sieve, seasoned it and blended in eggs and more cream. 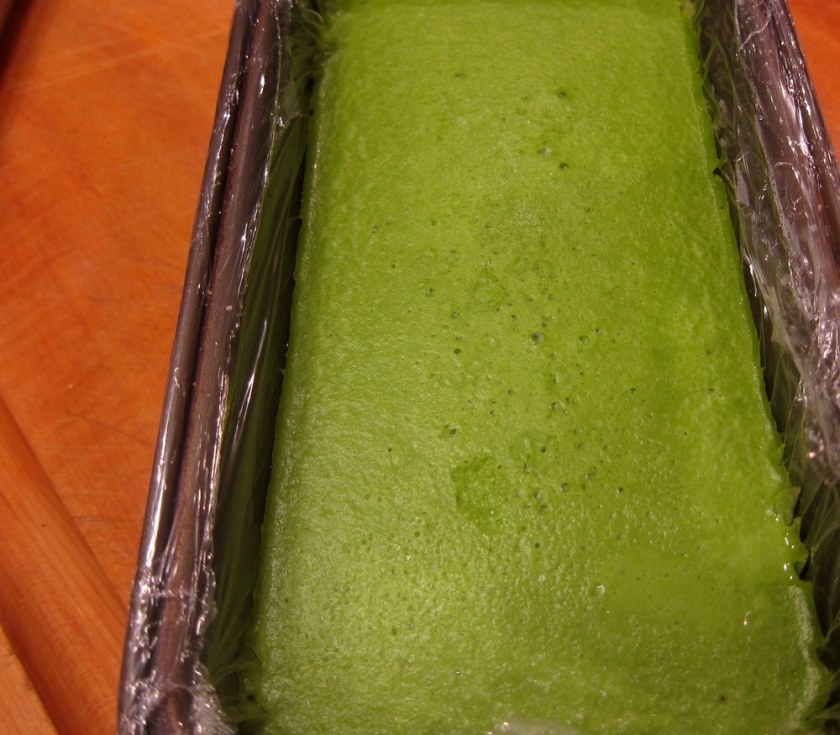 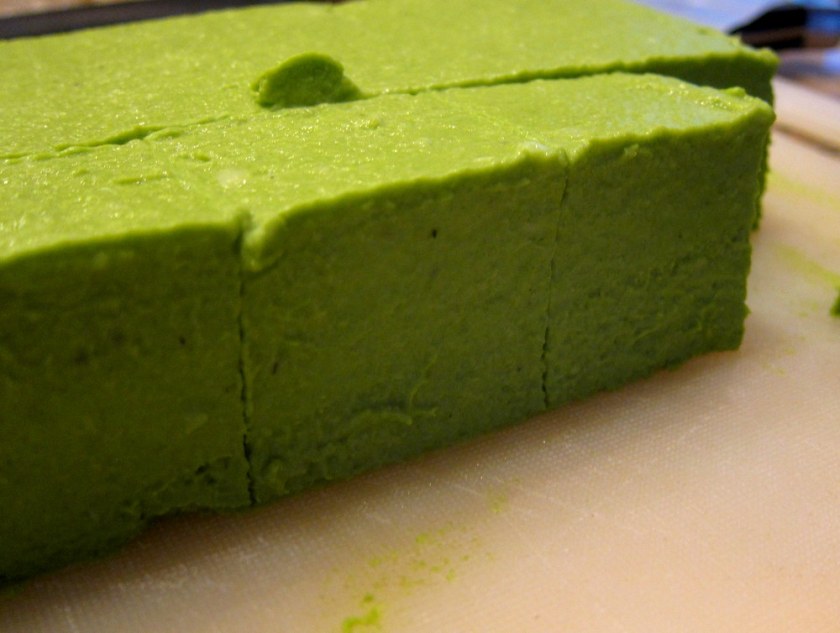 To cook it, I lined a small loaf pan with plastic wrap for easy removal later. I wrapped it with aluminum foil and cooked in a bain marie in the oven until set. This took a bit longer than the recipe recommends. I let the royale cool and popped it in the fridge until dinner time. Before plating, I gently unmolded the royale and cut it into neat 1 inch cubes and let them temper and come to room temperature. I tasted a few on their own. It’s rich with a lovely flavor of leek and has such a great smooth and comforting texture. For a few days after serving it with this dish we enjoyed the leek custard leftovers as a random side dish with dinner. It also goes great spread on crispy bread for a snack. 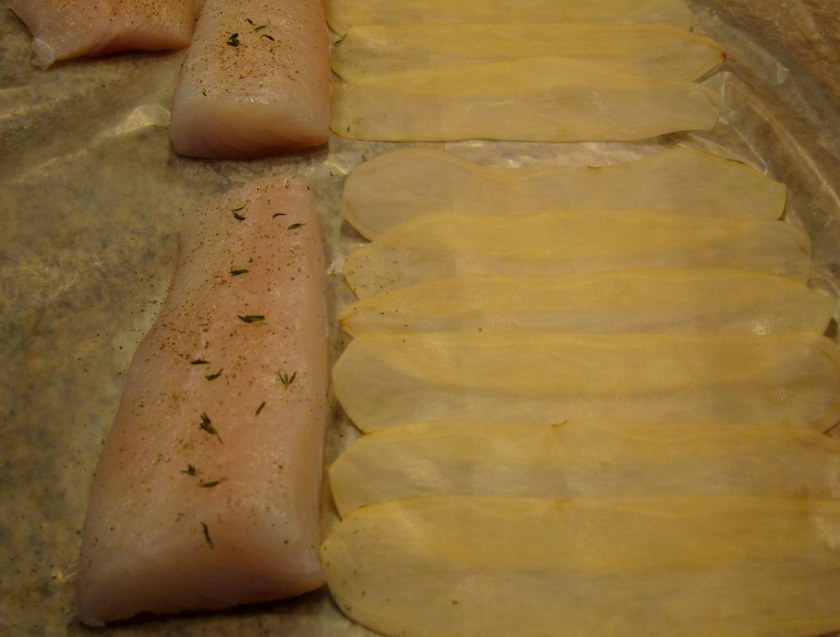 Next I prepared the red wine sauce by reducing stock, plenty of red wine and some port along with shallots and thyme. Then I whisked in a crap load of butter until we had a glossy rich sauce. Chef Bouloud uses a vegetable sheeter to make long perfect sheets of potato which he uses to make strips to wrap the fish. I don’t have one of those contraptions so I bought the longest potatoes I could get my hand on and used the mandolin to make long paper thin sheets. This worked pretty well. I seasoned the halibut fillets with salt and pepper and some thyme. Then I brushed the potato sheets with clarified butter and used them to wrap the fish. 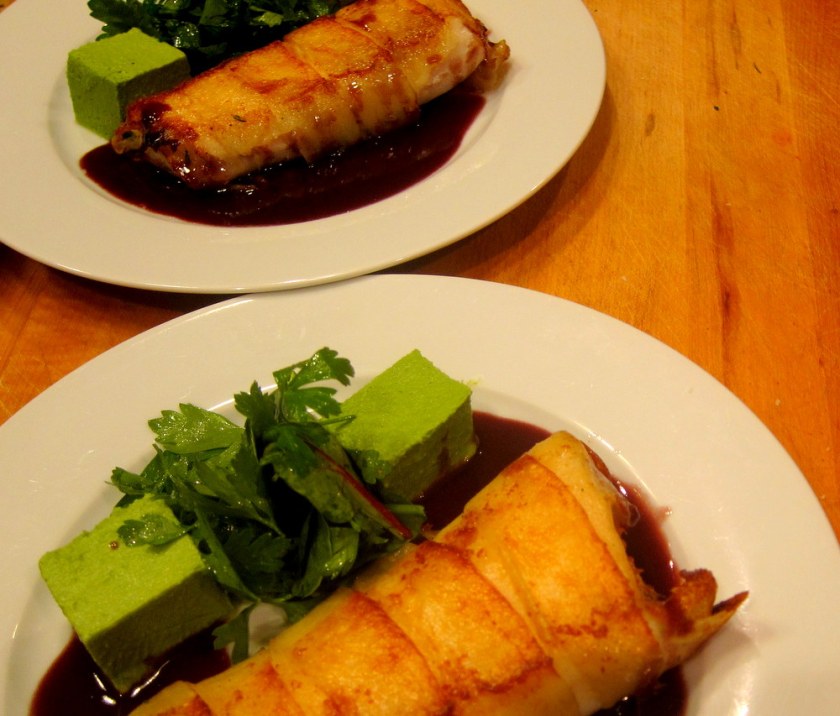 The mistake I made here is to let the wrapped fish sit in the fridge for a couple of hours. The salt drew some moisture out of the fish in the meantime. So, it was a bit of a pain to get the fish to brown in clarified butter when I was cooking it for dinner. With some careful gentle heat I got the potato/fish packets cooked well, but next time I will wrap and fry the fish right away.

To plate, I poured some sauce on the plate and topped it with the fish. I put a couple of royale cubes on the side. I dressed a small salad made primarily of parsley leaves with lemon and olive oil. The salad went between the leek custard cubes. The flavors were awesome and the whole thing worked. With a bit of care with cooking the fish the dish could be quiet spectacular. 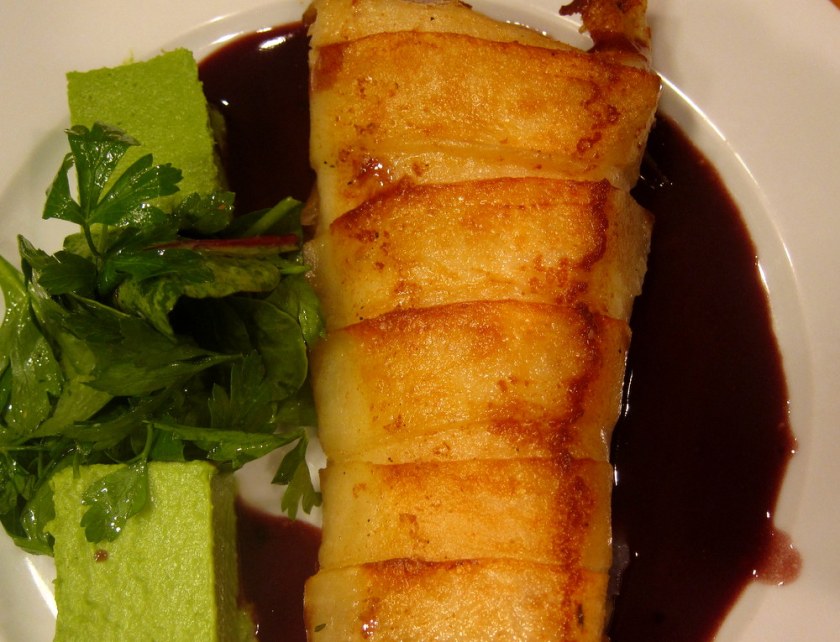