Cotechino with lentils is the classic, but in the American south eating black-eyed peas on New Year’s Day is the tradition. So, here the Hoppin’ John stands in for the lentils and a mighty fine stand-in it is too.

Making Hoppin’ John is not difficult but it does pay to have a solid recipe to follow and a good set of ingredients, namely the peas and rice. Ever since seeing chef Sean Brock on the excellent PBS show “The Mind of A Chef” and then reading through his book, Heritage, I have been ordering various grains and legumes from Anson Mills. The Sea Island Red Peas from them are as delicious as they are beautiful and they are great in Brock’s recipe for Lowcountry  Hoppin’ John.

I soaked the peas overnight in water before cooking them in homemade ham stock along with chopped carrots, onions, celery, a jalapeno, thyme and bay leaves. They simmer until tender and really hold on to their shape. A cup or so is removed and blended with butter to make a red pea gravy. This gravy stays separate and gets seasoned with red wine vinegar, salt and pepper. At service time the Hoppin’ John is dolled out into bowls with rice and the gravy gets added to each bowl as needed. It’s a very comforting and delicious bowl of food and just feels very nutritious. Yeah, I know, “feels nutritious” is a pretty silly term…but well, not sure how else to describe it. It just does….and I can describe it any damn way I want on my little blog anyways. 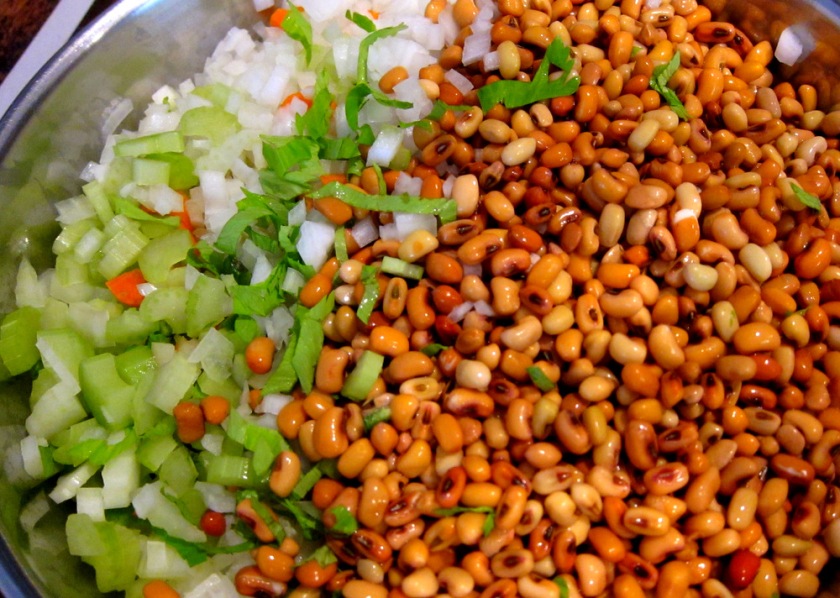 Now, onto the rice. It’s Carolina Gold rice also from Anson Mills. It has a lovely nutty flavor and good texture. I followed Brock’s instructions to cook it as well. First I boiled it in plenty of water like pasta until barely cooked. I drained it, spread it in a small baking sheet and put it in the oven at 300 F. I dried it for about 10 minutes, dotted it with butter and gave it a stir. After another 5 minutes or so the excess moisture was gone and the rice was perfectly cooked. The grains were cooked through with a slight toothsome texture and separate.

I made the sausages the day before. I rarely make them the exact same way every year. This time I based them on a recipe from the Napa butcher shop called The Fatted Calf and their book, In the Charcuterie. I’ve been cooking them sous vide for a while as well. I did a side by side this year though just to see if anything is gained by cooking the sausage in a pot of water in the oven at a low temp. Well, sous vide wins. The one that went in the oven lost a whole lot more volume and was not as evenly cooked as the sous vide ones. It was not bad by any means but I will be sticking with using my precision cooker for upcoming Cotechino cooks.